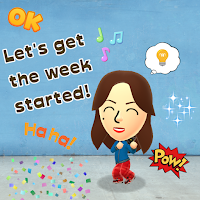 I know it's technically Tuesday, but this pic is still relevant. :)

You might have noticed that I've been MIA for a while, but there's been a lot of stuff going on. I kept thinking about popping over, but then ran out of time. LOL. There's just not enough time in the day! :/

Anyway, the last few weeks have included a lot of adulting. The financial year is over so we filed our taxes and followed up all the other stuff involved with that. Not to mention that we finally had a plumber come over to fix our leaky shower taps, which led to what seemed to be more problems. Until a few tests revealed what appears to be a simpler issue. Phew!

Last week was awful: rainy and cold. So I wasn't feeling the best. I spent the week going through some of my TBR pile and dreaming about ideas.

The dreaming/thinking about story ideas is something that has carried into this week. My head is full of snippets and images and characters and situations that I look forward to (hopefully) turning into stories. The problem is that everything keeps swirling around inside my mind and wants to be written at the same time. But of course, I can't do that...

So what I really need to do is to write everything down. As well as come up with some sort of writing plan. Yep. That's gotta happen, and I'm actually looking forward to it. :D

I also plan to write a synopsis for my 1980's YA novel and finalise all the files, pics, etc. My daughter actually read it and gave me some cool feedback. She enjoyed it--was shocked by some of what happened, liked the characters, and even shed a few tears. As her mum, I don't like making her sad, but as a writer, it was quite a reaction! I'm glad my little book made such an emotional impact.

We also binged on STRANGER THINGS, which was an amazing show filled with fantastic characters, creepy situations and totally captured the 80's. Oh, and we finished the final season of PENNY DREADFUL. Such a bittersweet ending to a complex and brilliantly dark show. Loved it! Loved both of them.

Well, that's about it.

I better go and do some of that stuff I mentioned above...