MURDER OF CROWS by Anne Bishop 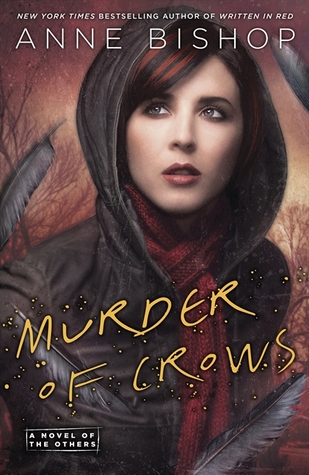 Murder of Crows by Anne Bishop
My rating: 5 of 5 stars

OMG. This book is fantastic! I actually put it on hold as soon as it appeared at my local library, LOL. And just like the one before it, I enjoyed it so much that I plan to pre-order the paperback edition as soon as it's available.

I was hooked from the very beginning. This is fast becoming one of my favourite series. It's just so original, and so well written that everything about this alien world becomes so vivid while reading it... I love it!

Meg has been in the Lakeside Courtyard for a while now and she's settled into her job as Human Liaison very well. She's also accepted and protected by the Others and has even helped set up a 'human pack' that everyone recognises. She's also managed to make Simon Wolfgard a lot more sympathetic towards humans--and that includes the police--than even he ever imagined he could be.

But when humans start targeting crows as well as Crows, everything changes. There are humans who are starting to forget their place and instead want to stand up to the Others. When that happens, whole villages and cities can be wiped out or asked to relocate. And Meg is having prophecies about what's going on around her. Serious things that will impact all of them, and lead back to the place she escaped.

Once again, the POV changes were excellent and help the reader see the many angles of the same story. This very dangerous world is made even harsher by the stupid actions of humans, who even in a world run by other beings still want to exert their greedy, selfish ways. I also enjoyed getting a glimpse into the institution where the other blood prophets are imprisoned and experience the horrible things done to these poor girls who are born with enough of a burden without adding slavery, rape and domination to the mix.

The addition of Intuits was also interesting, and I hope we get to find out even more. It's just so great to see these characters all develop and change their attitudes towards each other because of one brave girl who dared to take a stand. It just proves that without the bad apples, all kinds of creatures--big and small--can learn to get along.

I love these characters. I especially love the special bond Meg and Simon are developing towards each other. Something so strong that it scares the hell out of both of them.

Can't wait to read more of this awesome series!

View all my reviews
Yolanda Sfetsos at Tuesday, May 06, 2014
Share